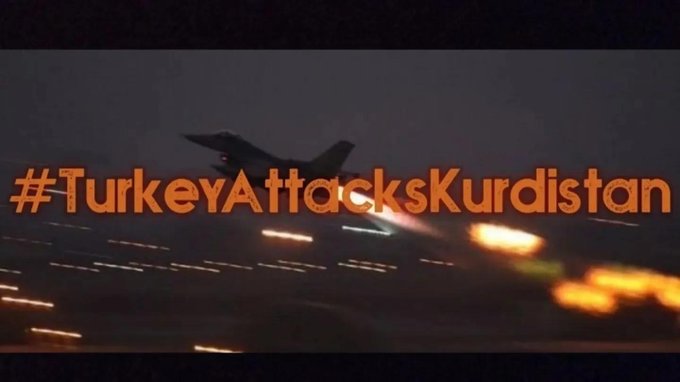 After months of war crimes, chemical warfare and massacres in the mountains of Kurdistan, Turkish fascists have bombed large parts of Kurdistan with a new offense of attacks. Since late Saturday night, the Turkish state has been attacking numerous targets in Rojava (Western Kurdistan/Northern Syria) and Başûr (Southern Kurdistan/Northern Iraq).
From Şehba to Kobanê, Dêrik, to Şengal and the Qendîl Mountains, a front of about 700km (434 miles) is under heavy fire.

With the recent faked attack in Taksim – Istanbul, Erdogan and the AKP-MHP hope to further distract from their defeat in South Kurdistan against the People’s Defense Forces (HPG) and provide a justification for their intensified war against the Kurds in Rojava/North and East Syria.
Despite killer drones, chemical warfare and non-stop terror against its own people, the Erdogan regime has not been able to break the resistance of the Kurdish people. The aim of those attacks is to destroy the revolution in Kurdistan, to end the struggle for freedom and self-determination.

When Qandil, Shengal, Rojava and all the liberated areas are attacked the aim is to extinguish the beacon of hope of the revolution in Rojava. This revolution has shown people around the world that a different way of living together is possible and that it is worth fighting – together. These attacks are an attack on all people who stand alongside the Kurdish Freedom Movement. If internationalism is the tenderness of peoples, it is time that all the people shoulder on shoulder defend Kurdistan against this fascist aggression.

It is obvious that these attacks are illegal under international law. Yet NATO, western states weaponry and the Russian Federation seem to support this aggression. As people and democratic forces around the world we have the duty and the necessity to act! Create publicity for the attacks! Inform your families, friends, neighbours, local newspapers, associations, movements and politicians! Organise rallies and demonstrations! Go to the places of the war machinery, disrupt this industry and market of death! Let’s hold the supporters and profiteers of this war accountable!

Kobane the capital of the resistance, where ISIS encountered it’s first and decisive defeat in 2014 is under attack by the fascist Turkish state. The fascist Turkish state is trying to do what ISIS failed to do. Our response must be bigger than in 2014, more than in 2018 and 2019 when we rose up for Afrin and Serekaniyê. We have the ethical and political duty to defend the world we want to live in! We have to prove once again that the solidarity and common struggle of the people are stronger than the biggest military resources. We can take strong steps through economic, political, diplomatic, and other measures to bring down Turkish Fascism!

The resistance of the people in Northern Syria, Southern Kurdistan as well as North Kurdistan/Turkey and especially the women’s revolution in Rojhîlat/Iran have driven Turkish fascism into a corner. It is time to bring it down!

The time has come! See you on the streets!


As Defend Kurdistan Initiative we call everyone to: