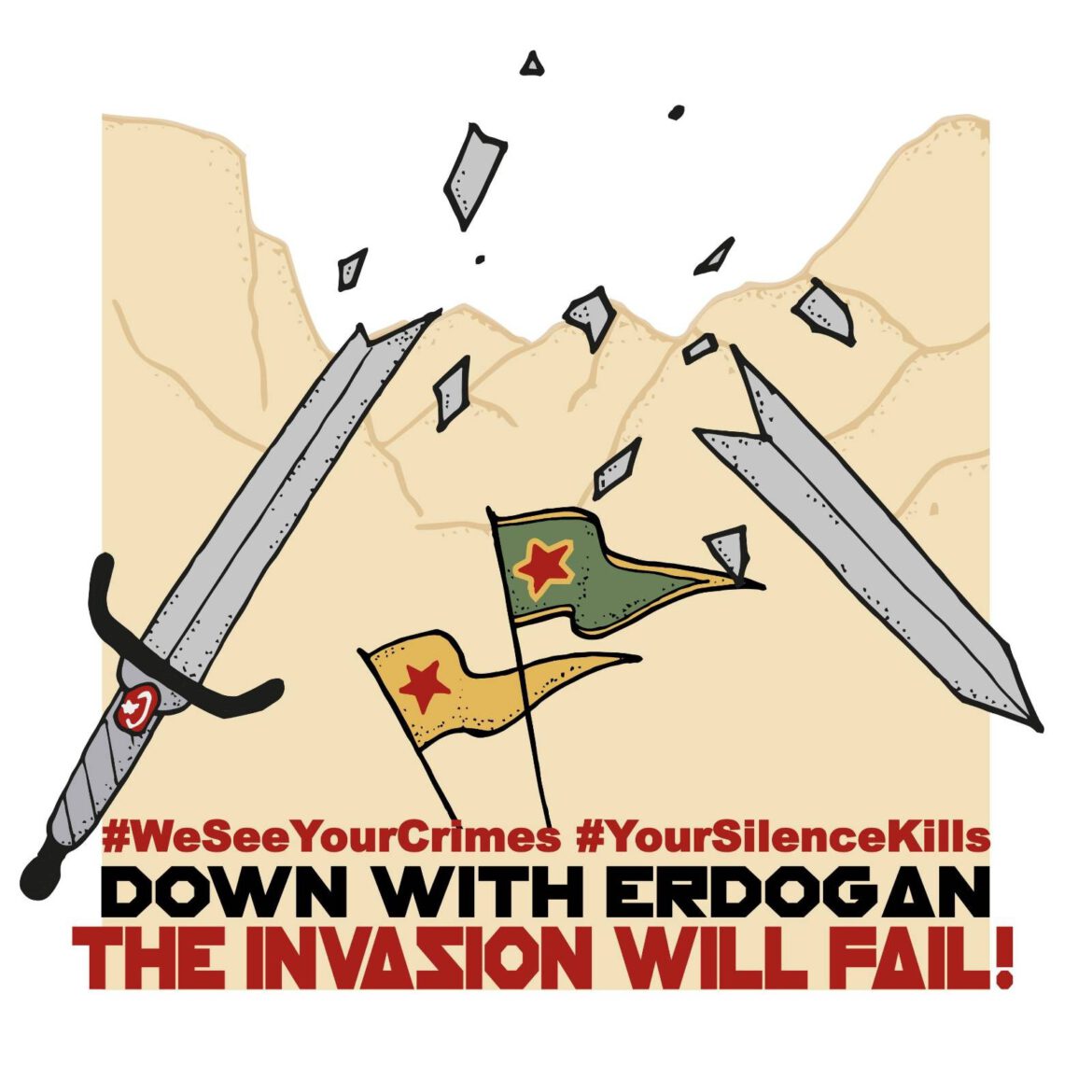 For a week now, the Turkish army has been attacking Rojava. We are witnessing the Turkish state wage a dirty war against the civilian population of the self-government of North and East Syria. In order to divert attention from its war crimes in South Kurdistan and to legitimise an attack on Rojava, the Turkish regime has,amateurishly, attempted to implicate the YPG in the bombing that happened in Istanbul two weeks ago.

The attacks have killed numerous civilian victims and many members of the self-defense units have fallen. Energy and health supplies as well as schools and other infrastructure are systematically attacked and destroyed. Thus, the attacks have the goal of forcing people to flee, driving demographic change. The situation is different from what it was in 2018 during the occupation of Afrin or in 2019 during the invasion of Gire Spî and Serê Kaniyê. These attacks, which have continued uninterrupted since the night of 19-20 November, not only extend along the entire border between Turkey and Syria and on the edge of the territories occupied by Turkey, but also affect areas far inland, such as the Deir-a-Zor region.

The current wave of attacks must be seen as a continuation and intensification of the war. The Turkish state has been waging this war for years against the liberated areas of northern and eastern Syria and the mountains of southern Kurdistan (northern Iraq). In the south of Kurdistan, after several operations in the past years, the Turkish state has recently intensified its actions against the guerrillas of the Kurdistan Freedom Movement and is committing massive war crimes. Chemical weapons and thermobaric bombs are used. Also in Rojhîlat (Eastern Kurdistan), the Iranian regime’s military has been marching into the cities since Sunday and is intensifying the cruel repression against the women’s revolution in Iran and Kurdistan. The Iranian regime is bombing the positions of Kurdish forces in South Kurdistan like the forces of Turkish fascism. The political rulers of this world idly watch this war of aggression or are content with expressing their supposed concern.

We are witnessing a historic resistance. Despite continuous attacks from the air against the revolution in Rojava and the accompanying danger to their lives, the population is not ready to leave their homes. On the contrary, in the past few days, the people of Afrin and the entire Autonomous Administration of North-East Syria have taken to the streets in their tens of thousands, clearly expressing that they will oppose this war of Turkey with all their strength and with all their means. They and all of us know that in Kurdistan not only a piece of land is being defended against an aggressor. In Kurdistan, a democratic model of society and a liberal perspective for the entire Middle East is also being defended.

In Southern Kurdistan, too, the advance of the Turkish army has been faltering for a long time due to the resistance of the guerrillas, despite continuous attacks from the air and the mass use of chemical weapons.

Since the intensification of the attacks on the evening of 19th November, people all over the world have taken to the streets together on a daily basis. We have shown the society in Kurdistan that they are not alone in resistance. And we have thus made an important contribution to keeping the resistance in Kurdistan on the media and political agenda of our countries. We are aware that it is now becoming more difficult with each passing day to keep this war in the media spotlight. But for us, this can only mean that we have to make our protest even more intense. For this reason, we call on people to continue taking to the streets. Let us form local and regional alliances! Let’s organise joint demonstrations and other creative actions! Let’s create campaigns with media impact!

We see your crimes – Stop the use of chemical weapons in Kurdistan!

Never before has Turkey committed more war crimes than in 2022. The Turkish attacks on Kurdistan have led to a multitude of war crimes. Including the mass use of chemical warfare agents and drones. Starting on the UN Day of Remembrance for all Victims of Chemical Warfare, we call on you to use your creativity and solidarity from 30 November until 3 December to take action (for example, through occupations, street theatre, flash mobs, stadium actions, public film screenings, etc.) and participate together in the demonstrations on 3 December in your regions.

Erdogan bombed Rojava after the Earthquake and the turkish army in the occupied regions is preventing the arrival of humanitarian aid!! #TurkeyAttacksKurdistan #StopWar #BijiKurdistan #Rojava #Northeastsyria

📌#LATEST| The World Health Organisation (@WHO) has said that Monday's earthquakes in #Turkey and #Syria will affect 23 million people, and up to 20,000 people may be killed.