DEFEND KURDISTAN Against Turkish Occupation is an international initiative proclaimed in June 2021 and aims at an immediate stop of the Turkish attacks on South Kurdistan and a withdrawal of all Turkish troops and Islamist mercenaries. The iniative demands the following:

Stop the destruction and exploitation of Kurdistan’s nature.

No complicity of international and regional powers in the Kurdish genocide.

Support of all Kurdish parties, institutions, and people for the guerrilla’s resistance and their united stance against the Turkish occupation.

No to Erdoğan’s neo-Ottoman expansionist project throughout the Middle East and Eastern Mediterranean.

All new developments in regard to the initiative DEFEND KURDISTAN Against Turkish Occupation. 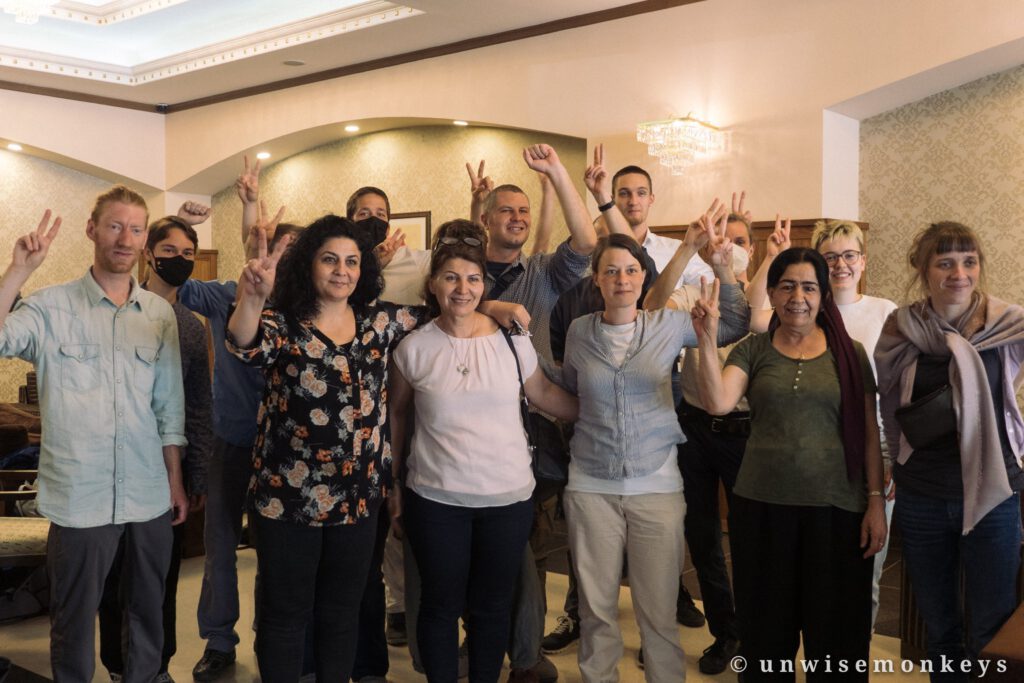 Today, Wednesday, 23.06.2021, another part of the International Peace Delegation from South Kurdistan was supposed to travel back to Germany. They were expected at 2 p.m. at the airport in Frankfurt am Main.
Six delegates are currently detained at the airport and interrogated by the federal police. Even after several demands there was no information about the reasons for the repression nor their whereabouts.
Already on June 12, 2021, the federal police had prevented a group of the peace delegation, including parliamentary group leader of the Hamburg Left Party Cansu Özdemir, from leaving the country at the airport in Düsseldorf. (NDR reported)

The goal of the international delegation was to create attention for the attack war of the Turkish state in South Kurdistan, which is contrary to international law. For this purpose parliamentarians, activists, journalists and other parts of the population were visited to get an idea of the current situation in South Kurdistan.

“We are shocked by the behavior of the German authorities. Once again, people who are working for peace are being criminalized,” said Luisa Koch, who was there to receive the delegation at Frankfurt Airport.

On April 23, the Turkish state initiated a large-scale military campaign targeting South Kurdistan (northern Iraq), attacking the regions of Zap, Avashin, and Matina. Since then, this unprovoked invasion has grown in intensity and scope. For years, Turkish President Recep Tayyip Erdogan has sought to secure Turkey’s position as a regional powerbroker in the Middle East at the expense of the region’s peoples, repeatedly proclaiming his desire to conquer territory once controlled by the Ottoman Empire. His first objective is to capture the two parts of Kurdistan adjacent to Turkey, Rojava (northern Syria) and South Kurdistan (northern Iraq). In 2018, the Turkish military and its jihadist proxy forces invaded and occupied the once peaceful Kurdish majority region of Afrin in Syria, and, in 2019, this occupation was extended to other areas in northern Syria, resulting in hundreds of civilian casualties and mass displacement.

The Kurdish guerrillas of the Kurdistan Workers’ Party (PKK) are resisting Erdogan’s campaigns of military aggression and occupation. This organized Kurdish resistance is the only force preventing Erdogan’s expansion further into Kurdistan and the Middle East. In 2014, when the genocidal Islamic State (ISIS) terrorist group occupied areas throughout Syria and Iraq and emerged as a major threat to global security, the PKK prevented ISIS from eliminating the Yazidi religious minority in the Sinjar region in Iraq.

NATO believes that they need to maintain relations with member state Turkey for geopolitical and geostrategic reasons, and does not challenge the expansionist policy of the Turkish regime. By remaining silent to placate Erdogan, they become complicit in his aggression. Erdogan, knowing he will face no consequences for even the worst crimes, is openly violating international law. His regime has used chemical weapons and jihadist proxy fighters in this current war in Zap, Avashin, and Matina, while its armed drones murder and terrorize civilians. Nonetheless, the United Nations, the European Union, the United States, and the Council of Europe join NATO in staying silent.

In early June, an international peace delegation went to South Kurdistan, joining with various organizations around the world to launch the international initiative “DEFEND KURDISTAN Against Turkish Occupation”. By calling attention to Turkish military aggression, they courageously broke the international silence around this war. Unfortunately, the Kurdistan Democratic Party (KDP), the ruling party in South Kurdistan, has taken steps to criminalize efforts taken to oppose the ongoing war, obstructing the work of the delegation for peace. Additionally, in line with European states’ ongoing policy of appeasement towards Erdogan’s regime, the delegation was also criminalized in Germany, with several members of the group, including those with parliamentary immunity, prevented from leaving Düsseldorf on June 12. Nonetheless, despite these obstacles, the delegation for peace has succeeded in raising awareness of the ongoing crisis and generating a wave of international solidarity.

We are now calling on people in the world to take to the streets on July 3 in support of the international initiative to DEFEND KURDISTAN Against Turkish Occupation, and to demand an immediate end to the Turkish military aggression against South Kurdistan and the withdrawal of all Turkish forces and Turkish-backed jihadist proxy fighters.

Today, around 7 pm, a Kurdish village named Galala, was bombed by a Turkish drone. Two people were killed, another one injured.

This is not a one-time thing, it follows a pattern of illegal Turkish incursion into Kurdish territory. It follows a pattern of fascist thought and action. The Turkish state, backed by NATO states like Germany and the United States, is an aggressor not only against its own population and all minorities but also against the Kurdish population throughout all of Kurdistan.

Today, just half an hour before this most recent attack, our delegation for peace left the village Kuna Masi. We were there to visit the family, who were wounded by another Turkish drone strike one year ago.

The mother of the family, who lost her leg in the 2020 attack, told us “They say turkey only attacks right at the border, and only PKK. But that is a lie. I am a civilian, I live close to the city, and they attacked me anyway. They do not care about human rights.”

Tonight, in Galala, just 20 km away from Kuna Masi, the drones struck again. So these genocidal acts from Turkey are continuing right now, using military technology from Europe, whilst the government from Kurdistan remains silent.
We call on people everywhere to condemn the Turkish attacks, to stop your governments selling weapons to that fascist regime, and, to our Kurdish brothers and sisters, join together against the invaders! Do not fight amongst yourselves! Right now, Turkey is doing everything to rebuild the Ottoman empire, so making divisions between Kurdish groups is EXACTLY what they want. We are here standing with you, and we are calling on the rest of the world to do the same. Biji Kurdistan!